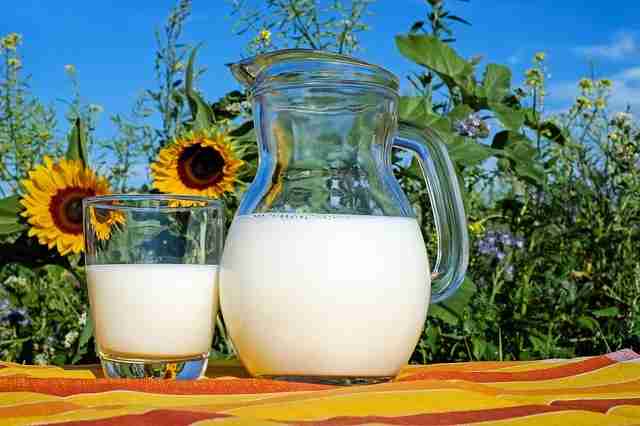 The concept of lactose intolerance has been big in my practice since 2001 when I opened The Children’s Ear Clinic in Perth. This is not necessarily a true allergy, but more often an inability of the digestive system to cope with milk and then a tendency to produce a range of symptoms as an indication there is a problem within the system.

Wikipedia defines Lactose intolerance as the inability of adults to digest lactose, a sugar found in milk and to a lesser extent dairy products, causing side effects.

It soon became evident to me that one of the simplest things Mums could do was to stop their children drinking copious amounts of milk and eating high levels of dairy products and this in itself would start to make a difference to cases of glue ear and frequent ear infections. As the years went on I observed that dairy was not just implicated in ears, but a very wide range of other symptoms and conditions.

I think we’ve all known that the view of dairy being a problem is not shared by many GPs and other medical people so I was interested to pick up a brochure entitled Understanding Lactose Intolerance produced by The Gut Foundation c/o of The Prince of Wales Hospital, Randwick, NSW. In the small print on the back it states Made possible through sponsorship from The Australian Dairy Corporation. A conflict of interest perhaps!

If you’ve been given a copy of this brochure or picked it up from your GP clinic you might find this an informative little brochure which could make you feel comfortable about continuing to give your child dairy. Under the heading What foods do I need to avoid? it actually states None at all!

The evidence gleaned from The Children’s Ear Clinic showed quite clearly the improvement in many children when their level of dairy was reduced and I observed this through treating hundreds of children in Perth and continue to do so today. I’m not one of those practitioners who thinks everyone should avoid dairy and I do know that intolerance can often be reduced through good constitutional treatment to build up the strength of the immune system and reduce reactivity to various allergens. However, I would agree with many people that dairy is not an ideal food for certain children particularly if you consider what our dairy herds are fed and medicated/injected with and how our milk is processed.

As a child I was a dreadful asthmatic – thin, weak and chesty! We had school milk everyday. I used to almost vomit each time I had to have my milk and of course in those days we were being told that milk was an important source of calcium and everyone needed it to grow strong. As I’ve got older, I realise (and so does my mother who also has a problem with dairy) that I just can’t have dairy in any quantity. If I do then I produce copious mucous and will often have a tight chest.

Constipation, diarrhea, gas and bloating are also common problems with dairy products for some people and it is often noticeable when Mums introduce formula to supplement breastfeeding or wean baby onto milk. It can be the beginning of long term problems if the GP or paediatrician is not aware of dairy being a potential problem or ignores it, as laxatives only succeed in making the bowels lazy.

And this may not be the only issue. Some parents have told me that it is obvious their child’s behaviour worsens if they are given dairy or their sleep is affected.

According to The Gut Foundation’s leaflet, there is no lactose in cheeses such as Edam, Swiss, Brie and Cheddar, but they seem to be a major problem for me too, as I suspect is the case with many children.

So is the problem lactose or is it the quality of our milk?

I can certainly tell the difference when I have full fat unhomogenised organic milk or high quality cheeses – I’m mucousy for a brief time but not so bad. A2 is no better than standard milk for me, and I’ve seen this is the case with some children. Many parents do say their children are much better on A2 milk so that’s always worth a try before you abandon it altogether.

According to Rudoph Ballentine MD in Diet & Nutrition: A Holistic Approach, because milk is a very complex food, it may be other constituents that cause a reaction besides lactose. Part of the problem with our milk today is that not only is it pasteurised, which started in order to reduce the incidence of tuberculosis, it is also homogenised (processed to break up the fat globules and stop the cream separating) or even UHT (ultra-heat-treated or ultra-pasteurised), all of which change the molecular structure of the proteins in the milk, making it more difficult to digest.

According to Lee Dexter, microbiologist and owner of White Egret Farm goat dairy in Austin, Texas, ultra-pasteurization is an extremely harmful process to inflict on the fragile components of milk. Dexter explains that milk proteins are complex, three-dimensional molecules, like tinker toys. They are broken down and digested when special enzymes fit into the parts that stick out. Rapid heat treatments like pasteurization, and especially ultra-pasteurization, actually flatten the molecules so the enzymes cannot do their work. If such proteins pass into the bloodstream (a frequent occurrence in those suffering from “leaky gut,” a condition that can be brought on by drinking processed commercial milk), the body perceives them as foreign proteins and mounts an immune response. That means a chronically overstressed immune system and much less energy available for growth and repair.

What you can do with pasteurised milk to make it more digestible is to boil it for a couple of minutes, as this is said to break down or undo the tight mass of proteins that is produced with the process. I have used this with some children, where parents have insisted on the child having cow’s milk, and it does seem to help, and certainly in India milk is always boiled before drinking because of its health benefits. This process can also reduce the tendency to forming mucous but never ever use the microwave to heat your milk (or anything else for that matter!).

Make sure you use full cream milk as skimmed and semi-skimmed milk have reduced nutritional value and both are usually highly processed. Recent studies into full cream milk have shown that it actually keeps you slim, which is the opposite of what we’ve been told since the 1950s. (That’s interesting when you consider those milk-loving tubercular individuals are usually very slim – see below!)

Some people seek out raw milk (often sold as pet milk due to health regulations) which is milk that comes straight from the cow and is completely unadulterated. Other people change to different forms of milk; goat, rice, soy, almond – but that’s a whole other blog!

In certain areas of the world such as northern Europe, India and parts of Africa where dairying and a diet high in milk have been traditional for hundreds of years, the local people can often tolerate milk throughout their lives, presumably only drinking the untreated milk they produce themselves. Some ethnic groups where milk drinking is not traditional cannot tolerate milk into adulthood because the enzyme lactase reduces or disappears early in life.

And as with everything these days, the way we tolerate foods is as much about gut health as inheritance, so ethic background is not necessarily a good guide. Permanent eliminination of dairy may also not be good or necessary as building up the immune system can build better tolerance. I can certainly tolerate small amounts of good quality dairy, but having a binge is not good!

From a homeopathic perspective there are certain constitutional types which do not tolerate milk well and you can generally figure out who these people will be when you take the case. Children who have a strong tubercular taint (family history of TB, asthma, allergies, eczema and/or who are often slim and prone to chest weakness) frequently have a problem with dairy. This makes sense when you consider that many forms of TB came from cows, the very cows that were producing the nation’s milk, so this is an inherited taint.

The tubercular child will often crave milk. My take on any craving with anyone is that it frequently shows an intolerance to that food and rather than feeding more because you think they like it, I would assess the case and recommend eliminating it. Interestingly, if you give the right remedy to a child who craves milk at an age when this need has usually passed, they will frequently lose their interest!

So, if you have a child with almost any type of symptom, my first move is always to eliminate dairy or greatly reduce it but allow only high quality products in small amounts. Some people who can’t take dairy tolerate yogurt well – I personally don’t – and cheese, but think about the quality of what you are giving and also the quantity. All things in moderation!

There is an upside to lactose intolerance, however, as recent research carried out in Sweden has shown that the condition could actually protect against breast, lung and ovarian cancers, which suggests that milk and other dairy products may have some connection to cancer. They looked at the health of 22,788 lactose-intolerant people and discovered their risk of developing lung, breast or ovarian cancers was “significantly lower” than people who didn’t have the intolerance. This suggests that being dairy-free is protecting them, say researchers from Lund University in Sweden, but they don’t feel there is enough evidence to state categorically that milk and dairy cause the cancers!

So celebrate a lactose-intolerant status or at least don’t fight it! There are so many other options these days and with such a large sector of the population potentially being intolerant it’s not so unusual as it was in the 1960s!

However, elimination alone often isn’t enough these days to bring the improvements in health you need to achieve as many individuals have such compromised immune systems from immunisation, diet and environment that the system cannot return to balance without a little extra help.

Homeopathy plus good nutrition is a great place to begin to bring balance back to your life and because we treat the whole person and not just the symptoms, there are usually other benefits in terms of health and wellbeing!!