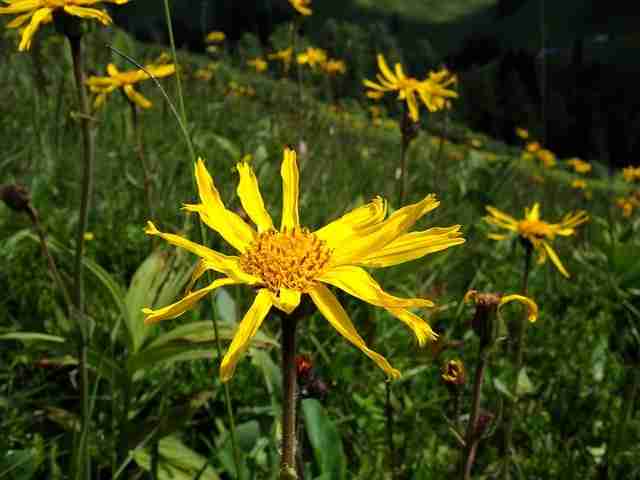 I hit my knee so hard on my desk the other day that my lower leg went numb and I couldn’t walk. I had visions of massive bruising and possibly not being able to climb the stairs to my bedroom.

I’m not very good at taking remedies – I often forget I have this wonderful tool box, probably because I’m so busy prescribing for everyone else – but this time I went straight for Arnica. Arnica 30c was the first bottle I grabbed. I took one dose and forgot all about it

Next morning I got out of bed gingerly but there was no pain or immobility. Inspected my knee expecting to find it black and blue but there was only a very faint yellowing and that was it!

How amazing is that?

How often do we see people who’ve had dreadful accidents, undergone facial surgery or seen football players with black eyes? While Arnica is well known around the world in its herbal form and is pretty well known in its homeopathic form, it’s possibly not as well known as it could be.

Arnica montana (aka leopard’s bane, fall herb, bruisewort) is a daisy which is indigenous to Central Europe, found in woods and mountain pastures. One story has it that shepherds who had made the arduous climb up the mountain or walkers on their return to the lower levels would pick the leaves and eat them to reduce soreness and bruising from over exertion. Reading the herbal materia medica I suspect they actually applied the leaves externally as Arnica is toxic!

The herbal tincture is used for external application to sprains, bruises, and wounds, and as a paint for chilblains when the skin is unbroken. Repeated applications may produce severe inflammation so you will often see a note on creams not to apply to broken skin.

In homeopathic form, which is non-toxic, this is one of my “must have” remedies for any first aid kit because it has so many uses.

It often referred to as ‘a trauma remedy par excellence‘, treating physical trauma and the mental/emotional trauma that can accompany it, for example, after a car accident or surgery.

When I look in the materia medica at the proving of Arnica – that’s the information which has been collected over the years as to what Arnica can treat – I’m always amazed at what it can be used for. If we look at the keynotes, so the main indicators, this can often expand our ideas on the affinities of a remedy. Sometimes we need to think laterally!

Here are some selected items:

Hopefully when you read this you can see a theme developing and get an idea of how useful Arnica can be. The 30c potency is adequate in most situations, although I do usually recommend a 200c for birthing.

Doses would be given according to how traumatic the injury or situation is, so the remedy might be required every 10 minutes for up to five doses, then reduced to hourly and two hourly as symptoms improve.

Some cases might require the remedy three times a day for three days (that’s my standard recommended dosage), but as in the case of my knee, sometimes a single dose is sufficient.

At Elements of Health we supply Arnica in drops and pilules for oral use (found under single remedies) and as a cream for topical use. We also have RRA (Rhus Tox, Ruta, Arnica) a great combination remedy which also covers injury to ligaments and tendons.

Our cream contains Arnica as a homeopathic remedy so there is no issue with applying to broken skin if required.

Arnica: Trauma and its effects, both recent and remote.

Melanie Creedy is a UK trained and Australian Registered Homeopath (AROH). She was Vice President and Professional Development Coordinator of the Australian Homoeopathic Association from 2011 to 2015 and is editor of the AHA National Newsletter.

Melanie has used homeopathy for 30 years and has been in practice since 1998. For many years she ran The Children’s Ear Clinic in Western Australia, but since her tree change to Tasmania, has a special interest in women’s and children’s health generally and helping individuals manage their journey on the spiritual path with homeopathy and her range of essences. Melanie has developed her own methods of dealing with complex cases over the years and offers distance consultations via phone and skype to allow people Australia-wide to access her services.

Homeopathy is a traditional medicine. It may be used in conjunction with other medicines. For any ongoing chronic condition, it is important to be assessed or examined by your healthcare professional or specialist. Always seek medical advice in emergencies. The information provided in this blog does not constitute medical advice but is for information only. If in doubt as to the appropriateness of a  suggestion or treatment seek advice from your homeopath.