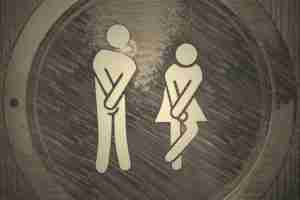 UTI’s, also known as bladder infections or cystitis, are one of the most common acutes we see as practitioners and I do find that a lot of people already have quite a good management plan in place.

Urinary tract infections, are a common problem for women. A UTI may occur for any number of reasons, for instance holding in urine instead of going to the bathroom, not urinating after intercourse (which can increase the risk in susceptible individuals), during times of stress and through poor diet. If you have frequent UTIs then obviously you have an underlying susceptibility, which basically means this is your weak spot, where you can become sick and produce symptoms if you are tired, stressed, etc!

Symptoms of a UTI may include burning before, during or after urination, frequency and an urgent need to urinate, often with only small amounts of urine passed, and cloudy or bloody urine. There may be pain or tenderness in the lower abdomen or back, fever, and a general sense of being unwell.

You should always check in with your GP/healthcare practitioner, particularly if you have fever, back pain and lethargy, as this may be a more serious condition.

Acute symptoms can often be reduced or halted by quick action with your homeopathic remedies, but ongoing cystitis needs to be treated by a registered homeopath. Reoccurring bouts show there is an underlying problem which should be addressed on the constitutional level. Often the remedies dispensed by your homeopath will be different to those you would use for your acute symptoms.

Too much sugar and processed food can cause your system to become acidic which is often part of the issue with UTIs. And despite what you may think, lemon juice or apple cider vinegar diluted in water are not acidic, but once metabolised help alkalise your system. Many cases of cystitis can be managed with simple and natural treatments such as increasing fluids and taking cranberry juice or tablets. Some people find Ural sachets helpful to re-alkalise the urine and even bicarbonate of soda, which Ural is based on.

Some cases may end up requiring antibiotics but it’s still possible to use homeopathy to help speed up resolution. Again, if this has been the case, your homeopath should be able to help reduce ongoing issues with a constitutional remedy.

Cystitis in little children seems much more common than it was, say, ten years ago. And while it tends to present most often in girls, it can still be a problem for boys. Do be aware that bubble baths and soaps can be an issue in sensitive children and learning to wipe properly and appropriately after going to the toilet is also important for hygiene and health. Any child with ongoing issues with cystitis should definitely see their homeopath to address the issue and look at the deeper levels of susceptibility and inheritance.

Here are some of the remedies that might be useful for the early stages of a UTI. They are listed in alphabetical order but if you read on you will see the main remedies with their particular keynote symptoms as you go through.

I know I’m repeating myself here, but if you are having an ongoing problem with UTIs do see your homeopath, rather than continuing to home prescribe!

Aconite: First stage of a UTI, where symptoms come on suddenly, particularly after exposure to cold, getting a fright, or catching a cold (see also Pulsatilla). There is difficulty passing urine, with a sensation of pressure and then burning pain before urination starts. Often with Aconite there is restlessness and anxiety. This is a useful remedy for retention of urine after labour and also in the newborn baby.

Apis: Symptoms present as severe burning and stinging in the urethra before, during and after urination, with a sensation of swelling. There may be a frequent, violent urge to urinate, with straining to pass even tiny amounts of urine. The abdomen is often sensitive to the slightest touch and the burning and stinging are worse from heat, night and better from cold applications.

Worse: Heat, night, before the period.

Berberis: The pains are generally worse before and after urination, but better during. There may be stitching, cutting or shooting pain extending from the bladder to the urethra or from the urethra to the pelvis, thighs or back.

Worse: Before and after urination, for motion, pressure, jarring.

Cantharis: This is probably the first and most commonly used remedy for UTIs. Symptoms present as a frequent, strong need to urinate, with much burning (sometimes described as feeling like acid) during urination but only small amounts are passed. There may be tremendous burning, cutting or stabbing pains in urethra and bladder before, during and after urination, or whenever the urge to urinate is felt. Sometimes urination may temporarily relieve the pain. The urine can actually burn and even the external genitalia may become raw. The pain is severe and the patient can be restless and frenzied. Interestingly, because this remedy is Spanish fly, which is known to be an aphrodisiac, sexual desire may be increased by the irritation, although no-one’s ever mentioned this symptom to me!!

Think of Cantharis when pain is the primary symptom.

Better: For cold applications and after the bladder has been completely emptied.

Mercurius: This is very nasty cystitis with burning and an uncontrollable urge to urinate. The urine may be bloody, dark or even greenish, and passed in small amounts. The burning pain is worse when the patient is not urinating and may be severe just before, when beginning or at the end of urination.

Mercurius Corrosivus (Merc Corr) is most often indicated but Merc Sol can be helpful.

Nux vomica: The Nux patient presents with a constant urging and full sensation, but only small, unsatisfying amounts of urine are passed. There may also be a strong urge for stool while straining to pass urine and there can be spasms of the sphincter. The problem may occur after excesses in eating, alcohol, coffee or drugs. Mentally the patient is likely to be restless and very irritable.

Think of Nux when urging is the main symptom.

Better: For warmth or warm bathing.

Pulsatilla: There may be sudden and strong urging to pass urine, with no ability to hold it back, unless concentrating constantly. The pain is not as intense as with Cantharis or Apis, but there is significant smarting and burning. The pain increases if the urge is postponed and urine may be passed involuntarily at the slightest provocation (coughing, sneezing, laughing, being surprised).

Think of Pulsatilla when the pain is irregular and changeable, paroxysmal or with spurting.

Worse: Lying on back, before the period, walking, getting wet feet (yes I’ve seen this!), catching cold.

Sarsaparilla: There is often copious urination with marked burning pain at the end of urination – the pain comes with the last few drops. There may be chill when urinating. There can be retention of urine and the patient may need to stand to urinate freely.

Worse: Cold, damp weather, before or during the period.

Think of Sarsaparilla when the main symptom is pain at the end of urination.

Sepia: Recurring cystitis with frequent or sudden urging with chills. There may be a sensation of pressure before urination and urgency to get to the toilet, sometimes with involuntary urination. The urine may be cloudy.

Worse: During the period, while walking and after sex.

Staphysagria: This is the remedy for what is known as “honeymoon cystitis”, so getting a UTI comes on after first sex or indeed every time you have sex! It is also useful after bladder surgery, catheterisation and during labour. There may be burning, spasms and a feeling of not being finished. Symptoms are worse during and after urination and can continue for a long time after or between urination.

Better: Lying curled up on the side.

Melanie Creedy originally trained in the UK and now holds a Bachelor of Health Science in Homeopathy. She is registered with the Australian Register of Homoeopaths (AROH) and is a member of the Australian Homoeopathic Association.
She was Vice President and Professional Development Coordinator of the Australian Homoeopathic Association from 2011 to 2015 and is editor of the AHA National Newsletter.
Melanie has used homeopathy for 30 years and has been in practice since 1998. For many years she ran The Children’s Ear Clinic in Western Australia, but since her tree change to Tasmania, has a special interest in women’s and children’s health generally and helping individuals manage their journey on the spiritual path with homeopathy and her range of essences. Melanie has developed her own methods of dealing with complex cases over the years and offers distance consultations via phone and skype to allow people Australia-wide to access her services.
Homeopathy is a traditional medicine. It may be used in conjunction with other medicines. For any ongoing chronic condition, it is important to be assessed or examined by your healthcare professional or specialist. Always seek medical advice in emergencies. The information provided in this blog does not constitute medical advice but is for information only. If in doubt as to the appropriateness of a  suggestion or treatment seek advice from your homeopath.